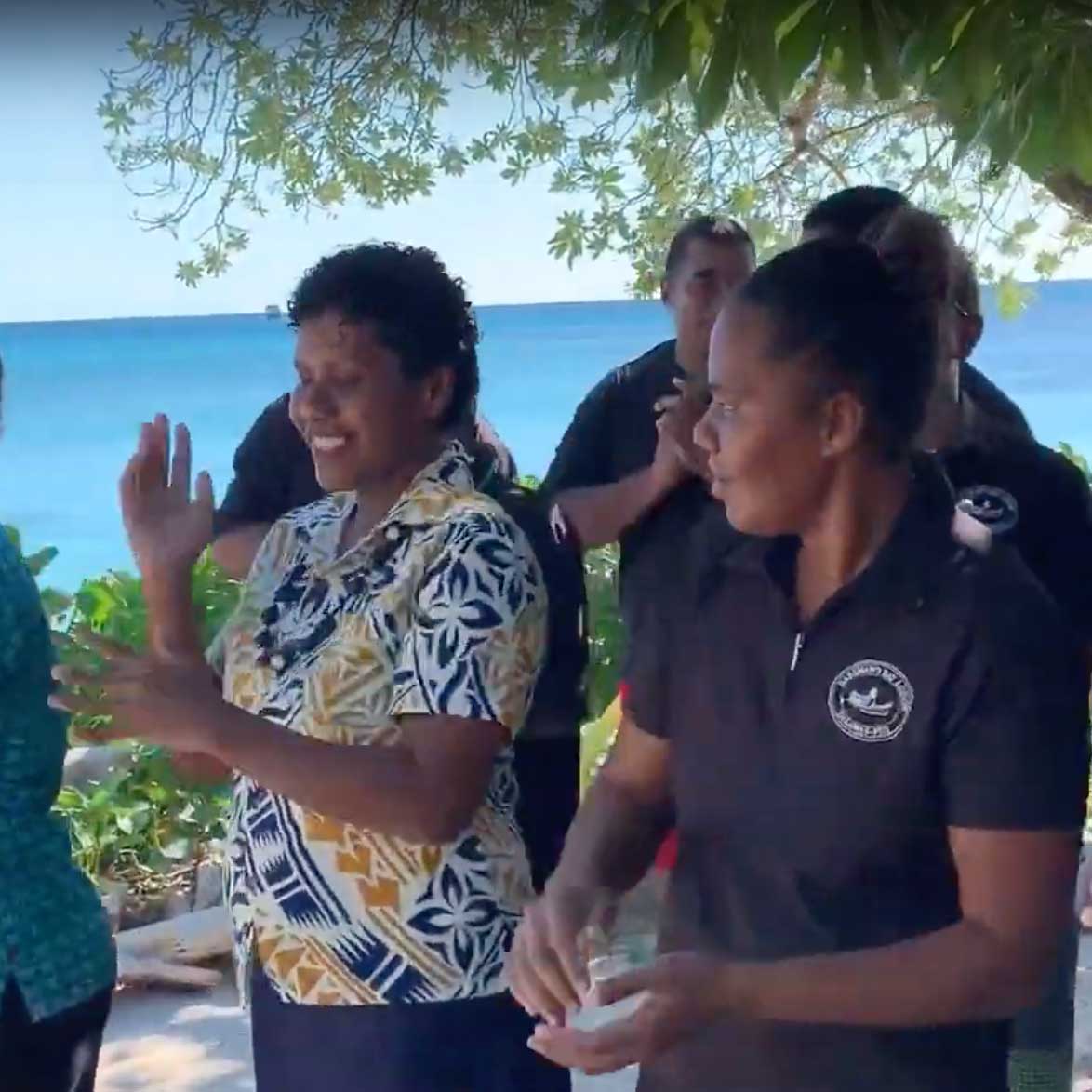 If you’ve ever visited Fiji, you’d be familiar with the welcome song: Bula Maleya. It’s popular across almost all of Fiji’s hotels and resorts, sung joyously on arrival in a chorus of big smiles, loud clapping and energetic ukuleles.

However, Elvis fans may recall the familiar melody from the 1966 classic movie Paradise, Hawaiian Style.

Trying to replicate the success of Blue Hawaii, this was the third movie he shot in Hawaii and his 21st Elvis epic. The movies’ plot is light hearted with Elvis’ signature smooth moves, exotic locations, pretty girls and scores of beautiful pacific island extras thrown in for good measure.

In this music video there are many pacific island nations represented including Tonga, Tahiti, Samoa, Aotearoa (New Zealand) and finally Fiji.  Elvis begins by crooning away to This is my Heaven surrounded by stunning Hawaiian dancers, then he launches in to Drums of the Islands with gusto.

About two minutes in to the clip, after he has raced from one island nation to the next, Elvis arrives at the Fijian group who take the spotlight with their version of Bula Maleya.  It is one of his legendary music videos, and very exciting to see our Fijian family on the silver screen. We do hope you enjoy this amazing blast from the past, and this eclectic mix of Pacific Island culture and Elvis Presley coolness. Video credit: ManUtd1962.

DRUMS OF THE ISLANDS (LYRICS)

Elvis’s classic film was shot in part at the Polynesian Cultural Centre (PCC) in Oahu, Hawaii.  The PCC’s theme song is Bula Laie. Laie being the name of the town in Hawaii where the PCC is located.  The song Drums of the Islands is rumoured to be based on an old Tongan chant Bula Lai, and the PCC version was thought to have been written by Fijian village chief Isireli Racule when he worked there. The following video shows Jack Damuni leading Bula Laie during the Polynesian Cultural Center’s 50th anniversary “gold” (1963-87) alumni night show on September 6, 2013. Video credit: MoStreetProductions.

The true origins of Bula Maleya are hard to determine with any certainty, but one of the most popular theories is that it is an old Fijian battalion song brought back after 1,600 men served, in collaboration with Great Britain, during the Malayan Emergency from 1952-1956. The song was written to commemorate the cooperation between the troops, and in the years following the war the tune was adopted as Fiji’s national welcome song. Today Fiji and Malaysia continue to enjoy a friendly, deep, and mutually beneficial relationship. The following film reel shows the departure of the men from Suva with the haunting Isa Lei farewell song heard in the background. Video credit: British Movietone.

GREETINGS MALAYA AND FIJI ALSO
ALL THE YOUNG MEN ARE VERY STRONG
TALKING TO THE SEA, GIVES ME HAPPINESS
HELLO, HELLO EVERYONE

REMEMBER FIJI, A SMALL COUNTRY
WITH A WILL TO MOVE FORWARD
FIJI WILL GROW TO BE FAMOUS
FOR MALAYA TO BE KNOWN IN THE WORLD

There are a few versions here and some lovely history to boot, but we do love the traditional joyous rendition of today, that is known across Fiji as the national ‘welcome’ song.